Audrey Storm is an ECA corporal who was wounded in battle.

A tough, but wounded young ECA soldier, she seeks revenge against Captain Reiner for her fallen comrades, but is powerless to carry it out.

Audrey Storm has spent her entire life on the battlefield, born in the trenches and raised in secret by a committed young soldier. Storm's mother knew pregnant women were not allowed on the battlefield. Children are a sacred commodity for the ECA both because they are the future of the faction, in a time of dramatic population reduction, and because the Insurgents are known to roast and eat any newborns they get their hands on. But Storm's mother was devoted to the cause, to winning the war, and refused to retreat from the front. She waged war through her pregnancy, gave birth in the mud, and stayed in the trenches tending to the wounded and sick while raising her daughter.

Audrey Storm maybe have been wounded by Captain Reiner's attack, but she survived. And she's going to keep surviving. she's going to carry on her mother's fight, until she's the last one standing on this god forsaken planet.

Audrey asks the player to take care of the Reiner that wounded her, starting the side quest Payback. 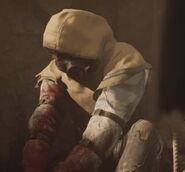