Crafting [1] is a mechanic by which you improve weapons and armor using certain Resources. Gear you have modified through Crafting will display the

symbol. You can access this with a scientist on your side. Talk to Zahedi at the camp to get started. You unlock Crafting by progressing the story in the First City zone.

Improve gear rarity to increase its primary parameter (firepower or armor) and receive an additional mod. The bonus attribute values of the improved item will be raised randomly. You will also be allowed to select one of three randomly generated Mods to add to the item.

Can only be used on Unusual or Rare items.

Iron for Weapons or

Leather for Armor. Improving the rarity of Rare items costs

Titanium. The rarity of Epic and Legendary items cannot be improved. 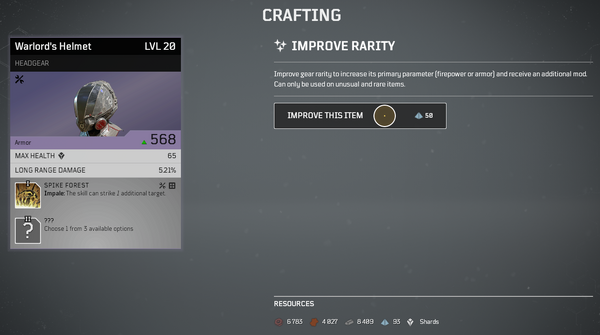 Anomaly Shards. Attributes have 6 upgrade stages available, displayed below each attribute in the Crafting menu.

Shards are exclusive for each attribute and can be attained by disassembling items. The type of shard you'll get is indicated by the shard icon next to an attribute. Shards used on gear can be partially recovered on disassembly.

You can raise the attributes of Unusual, Rare, Epic, and Legendary gear. 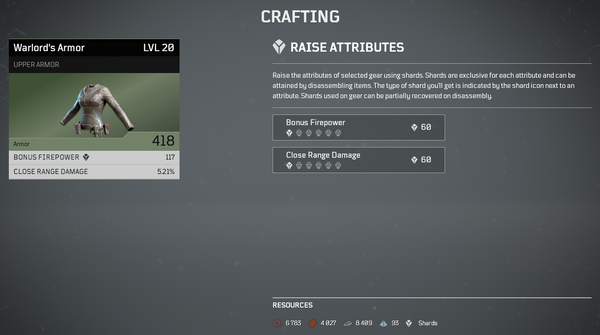 Change a Mod for another one. This action is repeatable.

Only one slot can be modded. When you choose which slot to modify, the other becomes permanently locked from modification. Remember that modding gear this way allows you to create a combination of Items and Mods that would not normally appear in the game! For example you can place a Tier 2 Mod in a Rare item, which you would normally only find Tier 1 Mods in.

Disassemble an item with this Mod to unlock it. Once you have a learned a Mod you will see the

symbol next to it on any item that has it.

You can Mod Rare, Epic, and Legendary gear. 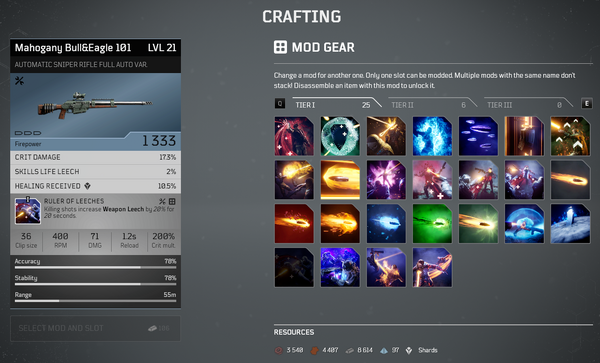 Change the weapon's variant to another that is available for this weapon type. Weapon variants are unlocked with higher hero levels. The cost of this action is determined by the level of the Weapon selected for swapping, not the variant. You can swap the variant of Common, Unusual, Rare, and Epic gear.

For a list of stats for each variant, see the Weapon variants section on the Weapons page. 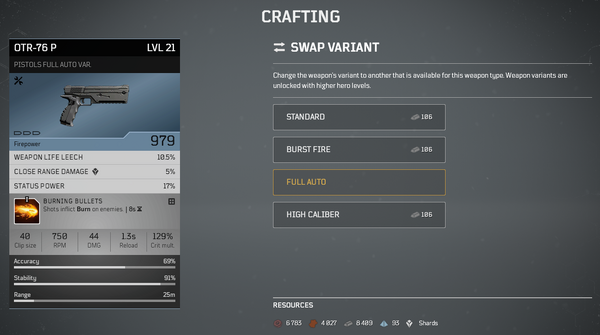 Raise the level of an item to increase its primary parameter (firepower or armor) and reroll attribute values. In case of Rare and Epic items, this action also frees up one stage of available attribute upgrades.

An item's level cannot be raised above the equippable item level cap.

Value of each leveling up depends on item level. Approximate increase of amor/firepower/anomaly power past item level thresholds:

This needs more testing to validate item level up values are consistent for every quality, weapon type, armor type, and health. The above values are taken from Earthborn Renegade's Assault Rifle and non DLC single-shot rifle. 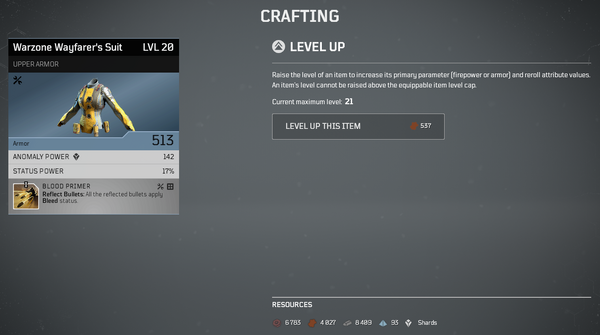