Shira Gutmann was an engineer in ECA and is currently the Grand Marshal of Rift Town and de facto leader of the ECA. Her father helped design the plan for colonizing Enoch, and gave up his place so that Shira could join the mission.

Shira is first met during the Arrival mission at the beginning of the game. She becomes accessible later as well after completing Reunion Step 6.

Shira is part of the ECAs engineering team. As one among the Flores' essential crew members, she's had a hand in the ship's construction and design, while it was still in Earth's orbit. On Enoch, she's been assigned to accompany the Outriders on landing day, to gather planet data analytics and oversee the technical side of the colony's establishment.

Born in Tel Aviv, she had a troubled childhood in that city's last years, before war and rising temperatures rendered the desert countries uninhabitable. Her father's position as a high-ranking city-planner meant the family was able to escape before war tore through the country. Resettled in Montreal, Shira was able to get an Engineering education in one of the few cities that still supported universities.

Shira did all she could to try and live a normal life, taking in stray animals, giving food to the hungry. But in a dying world, there was little room for people like her. When armed conflict eventually creeped into Montreal, she abandoned her home and committed herself to the construction of the Flores.

During her time in Earth's orbital station, she supported her father's work on the Flores. Shira recorded hundreds of hours in spacewalk while building the ship, and contributed to such systems as life support, hull reinforcement, and solar panelling. But even for skilled engineers like Shira, seats on the Flores were hard to come by, even more so after the Caravel's launch failed. Shira's father, the only one in the family with a guaranteed seat, gave up his place for his daughter.

31 years after the landing, Shira is nearly unrecognizable. She has ascended to Grand Marshal of Rift Town, one of the ECA's Council of Grand Marshals leading the war against the Insurgents. The buoyant daydreamer you met on landing day has become a hardened pragmatist, and a woman of commanding presence.

For decades, Shira's sole concern has been stopping her sector from falling apart. She could not afford to hope for anything more... until you appeared on her doorstep.

Shira was part of the scouting group that first landed on Enoch, tasked with recovering lost probes that would inform the Flores whether the planet would be hospitable. Her particular responsibility was to ensure that proper procedure was conducted during the mission, much to the dissent of Sergeant Major Charles Maxwell.

Once the group's headquarters was established, a smaller team (Alpha) was dispatched to continue the mission. It was at this expedition that she first encountered the Outrider, and took a picture with them. Her scans then detected some probes, and noted that one in particular emitted a peculiar signal. Going against Maxwell's orders to return to base, Alpha team moved to investigate the probe.

They arrive in a dense forest, but quickly prepare to leave when an Outrider contracts an illness from ambient black fungus. A dangerous storm began to brew, injuring the team and forcing them to evacuate immediately. Upon arrival at base, Shira reports to Maxwell that the planet is too dangerous for the rest of the humans to land. She sees Maxwell kill Captain Jack Tanner and order the extermination of Alpha team. Shira retreats to safety to tend to the wounded, telling the Outrider that Maxwell has the authority to call off the landing.

After Maxwell's death, Shira recovers the wounded Outrider and moves them into the headquarters. She places them in cryostasis, hoping that they can survive long enough for the assistance of a medical team. For now, more humans were arriving on the planet.

When the Outrider arrived in Rift Town after 31 years in cryostasis, Shira was not startled at their preservation. The years of conflict had turned her into a hardened pragmatist preoccupied with keeping her people alive. She discussed the capture of Jakub Dabrowski, an Outrider held hostage by a crime syndicate, but before she continued, the Outrider immediately set off to free their comrade.

Once they were reunited, she explains the current state of humanity. The human population is unsustainable in the face of the hazardous planet, so factions war over supplies. She had been promoted to lead Rift Town as Grand Marshal, and was the only ECA officer alive. The Insurgents are a menace to her people, and the Anomaly keeps them inside the valley. Without some sort of miracle, Rift Town will eventually be destroyed.

After learning of the Outrider's Altered state, she discusses that they could embark on a mission to clear up the town's supply line and eliminate an insurgent Altered—In exchange, she would answer more questions.

Afterwards, she discusses a signal that has been perpetually broadcasting; this fact means that the source of the signal exists in a place safe from the Anomaly. Now supplied with the exact frequency the Outrider recorded, they could trace the signal's source with the help of Dr. Abraham Zahedi. She sends the Outrider, Jakub, and Sniper Jane Colm to rescue the doctor from enemy territory. 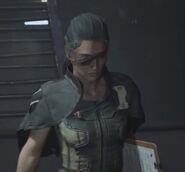 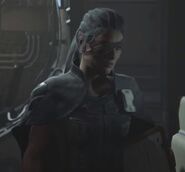